We believe in neighborly service.

The Zenda Telephone Company had its beginnings in 1902. E.C. Dafforn offered the first telephone service by placing a wire on a farmers’ fence posts.

In 1924 the company was sold to Jensen-Fuller. Two years later, D.P. Graber and his wife Caroline purchased Zenda Telephone Company. In the year 1939, they sold the company to their son Woodrow “Woody” Graber. In 1941 Woody married Beulah McClellan and together they operated the business. Later their daughter Ruth and her husband Jerry Vanlandingham shared in the responsibilities of the company.

In 1956, the company incorporated and the entire exchange was rebuilt. New poles and wire replaced lines attached to fence and catalpa posts. A new automatic switch was installed, and on Christmas Eve of 1958, customers were able to dial for service.The new switch replaced the switchboard and its local operators that had previously served the customers 24/7.

In 1976, buried cables replaced the wire, and poles, and all one-party service came into being, along with direct long distance dialing. The original Leich switch of 1958 was replaced with Siemens Stromberg digital switch in 1990.

In January 2001 Zenda Telephone Company was purchased by TelAtlantic Communications of Alexandria, Virginia. High Speed Internet was offered to their customers in 2003. In December of 2004, TelAtlantic upgraded to a Tekelec 7000 Class Packet Switch. Zenda Long Distance was added to its services in 2005.

In 2013 Zenda Telephone Company completed a $2.6 million dollar upgrade of facilities to provide service over an all fiber optic network. Its customers now receive services over a robust state of the art fiber optic networking rivaling any of its kind. Zenda Telephone Company connects its customer to the world and provides the high tech communications needed to compete in the 21st century.

Zenda currently services about 130 access lines over a 120 square mile area in South Central Kansas, about 60 miles southwest of Wichita. This equates to about 1.6 access lines per square mile. The economy is predominately based upon rural agriculture. 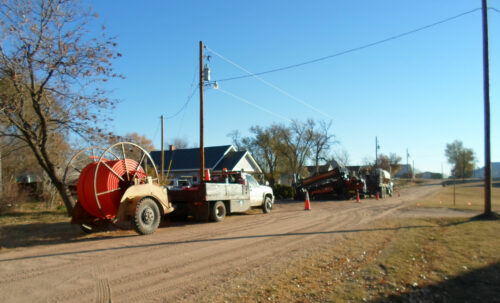